“I’ve always known that Marquette...it’s just the place to be”

Throughout Marquette’s history, the downtown district has been a vibrant cultural hub. In fact, the small handful of businesses that make up our potent downtown are often looked to for all sorts of inspiration from aspiring local entrepreneurs, even U.P. wide. The liveliness of Marquette’s historic downtown is truly special, and its essence is something that’s provenly impossible to replicate. That essence is a significant part of the Queen City’s lasting legacy and it’s owed to the very businesses that built its foundation, or at least, the buildings that house them. It takes a remarkable sense of ownership & responsibility to our community to establish a successful local business here in Marquette, which is something that is endlessly on display along the coveted downtown stretch. At the epicentre of that continued effort, quite literally, are Jen Ray & Tom Vear. Current owners of centrally-located Donckers, as well as the more recently renovated Delft Bistro right next door. The pair has played a significant role in the ongoing reimagination of the downtown over recent years. And so, when presented with an opportunity to learn more about exactly why they’ve made Marquette their life-long passion project, we lept at the chance to experience their ambition first-hand. Swept up in the early hours of their daily operations, here’s what we’ve learned: 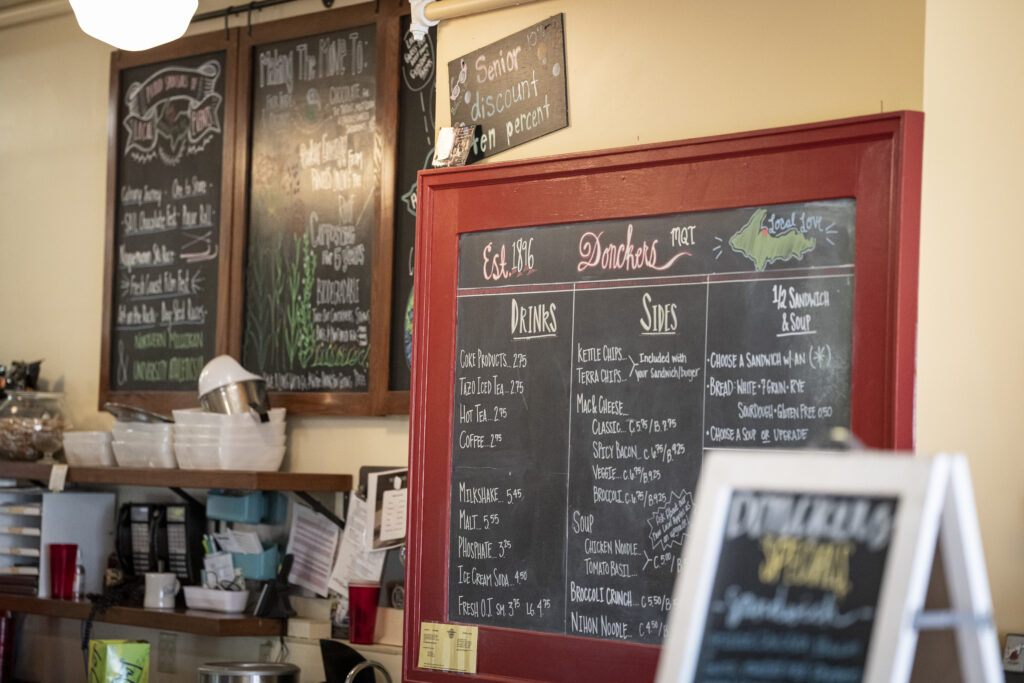 Jen & Tom are both from the Chicago area, which adds them to a growing list of Marquette transplants that have – and continue to make – incredible contributions to the area; a more and more common occurrence these days. Their ties to Marquette began with Jen, who became familiar with the area during camping trips she used to take with her family in the U.P. while growing up. Thomas Ray, Jen’s father, at one point even relocated her family northwards after becoming the 9th Northern Michigan Bishop back in 1983. “I fell in love with Marquette, like everybody does”, Jen had to say about the family’s move (she was just a senior in high school at the time). Her role as an impactful community leader today, however, wouldn’t come until after traveling for a while after finishing college, eventually landing back in Chicago, finally meeting Tom, and starting a family.

During those early years for their family, still firmly planted in Chicago, Tom was busy with work in the Chicago Board of Trade Building. Amassing about 20 years experience in the trade industry before the family’s relocation to Marquette, Tom’s professional skill set – built alongside his love for construction & renovation – not only aided in their initial trajectory, but also continues to play an impactful role in their ongoing work in Marquette today. Similarly, Jen’s time spent in Chicago pursuing a love for social work & community-building have surely found their stride here in Marquette. She acknowledges that after having some difficulty finding fulfilment in her various professional roles back in the city, Marquette has truly become a home for doing what she loves. What ultimately drew the pair northwards with their family in 2001 was Marquette’s “real sense of community”, and them wanting “to see what they wanted to do up here”. They “always knew Marquette had potential”, saying that it was “time to move up and take advantage of the opportunities [here]”. 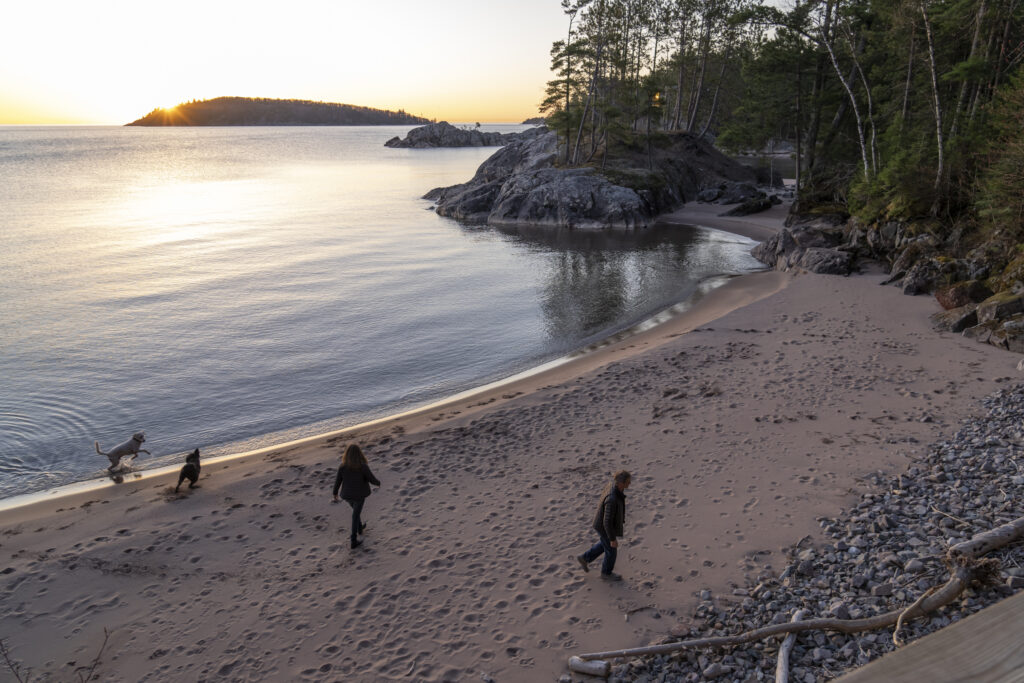 Jen & Tom’s downtown endeavors first began back in 2008, when then-owner of Donckers, Frederick Donckers, caught sight of some of Tom’s construction work on the eye care building on the east side of Washington Street. After getting a sense of Tom’s work & enthusiasm for projects, Fred ultimately offered the purchase of the building to Tom, famously saying “if you buy the building, you buy the business too.” Born from that transaction, began a healthy community relationship between Tom, Fred & the greater Marquette area that’s still felt today. Fred even offered to stick around for a time, and ended up making chocolate for Tom and the Donckers business for 2 years after selling which, we believe, is just a part of that inescapable downtown Marquette spirit. Jen & Tom’s takeover of the Donckers shop, all said and done, was wondrously symbolic. The business exists now as a bit of a takeover, but really, the dotted line they signed on would come to mean a great deal more to the community than they could have ever imagined.

At the core of every entrepreneurial vision, as is evident, exists a healthy incorporation of skills and abilities accumulated throughout life. While Tom’s passions do rest within construction & renovations, the couple playfully mentioned Jen’s previous waitressing experience in Chicago as well. Her experience would come to play a refreshed owner/management role in their restaurant businesses later on, but it was her childhood experiences in the greater U.P. with her family that fueled her interest in finding professional permanence in the area. And so, individually, Jen & Tom obviously both bring unique experiences and vision to the table…but it’s when they come together with their ambition that they’ve truly been able to accomplish extraordinary things in their local communities.

Donckers, before Jen & Tom fell into their current ownership role, was already a historical landmark in the Marquette area. Serving customers as a candy/chocolate shop, as well as a small bistro style restaurant, Donckers recently celebrated their 125th year of business. The Delft, similarly, has been an iconic installation in Marquette’s downtown since its construction in 1914. Now entertaining guests as a hit restaurant, The Delft has undergone several reimaginings throughout its years. Living its first life as a stage for theater & performances, then becoming a movie theater which briefly housed Upper Michigan’s largest ever movie screen back in the 1950’s, it’s treasured for its cultural impact at every stage.

Take a stroll through Marquette’s downtown on any day, and you’ll quickly see just how decorated the scene is with these impactful, historical local businesses & buildings. They’re recognizable not only for what they are today, but for everything they’ve been over the years. There’s immense respect for maintaining each building’s historical integrity, which is something that stands Marquette apart from pretty much everywhere else. The Delft is an excellent example of this effort which, as we’ve mentioned, has gone through several renovations over the years. Despite all the change, however, the original marquee’s lights remain on & in-use, and so the spirit of the original Delft Theater remains. Marquette is chalked full of friendly, community nods just like this.. .and something that Jen & Tom are expertly attuned to: “We like to buy buildings, do construction, [and reuse] them for contemporary projects”.

“You can’t expand beyond until you have a strong center. The downtown over the last 20 years has really grown. When people really believe in the downtown of their towns, that’s where things get exciting.” – Jen

The construction, as we’ve mentioned, is something Tom particularly enjoys. His gift for the grander vision of downtown Marquette helps to maintain the integrity of the district, all while helping to keep even the newcomers passionate about their spaces. Without question, the canvas that has become downtown Marquette is owed, in more than a few ways, to Jen & Tom’s entrepreneurial quest. Their heavy involvement in the local grocery co-op, Marquette Food Co-op, is also something to be celebrated. As one of the very first projects they undertook together in Marquette, their expert investments in people, ideas and community-minded businesses is truly unrivaled. It’s apparent that at their roots there exists a fundamental persistence for sustainability and reusability in the area. Within their own businesses, they make powerful efforts to support as many other local businesses and suppliers as possible. Their daily reinvestments in the heart of this town have heavily impacted the liveliness of Marquette, and with such massive, unprecedented influence on the downtown, you can really feel the energy that pulsates outwards from its center.

“You can’t expand beyond until you have a strong center. The downtown over the last 20 years has really grown. When people really believe in the downtown of their towns, that’s where things get exciting.” 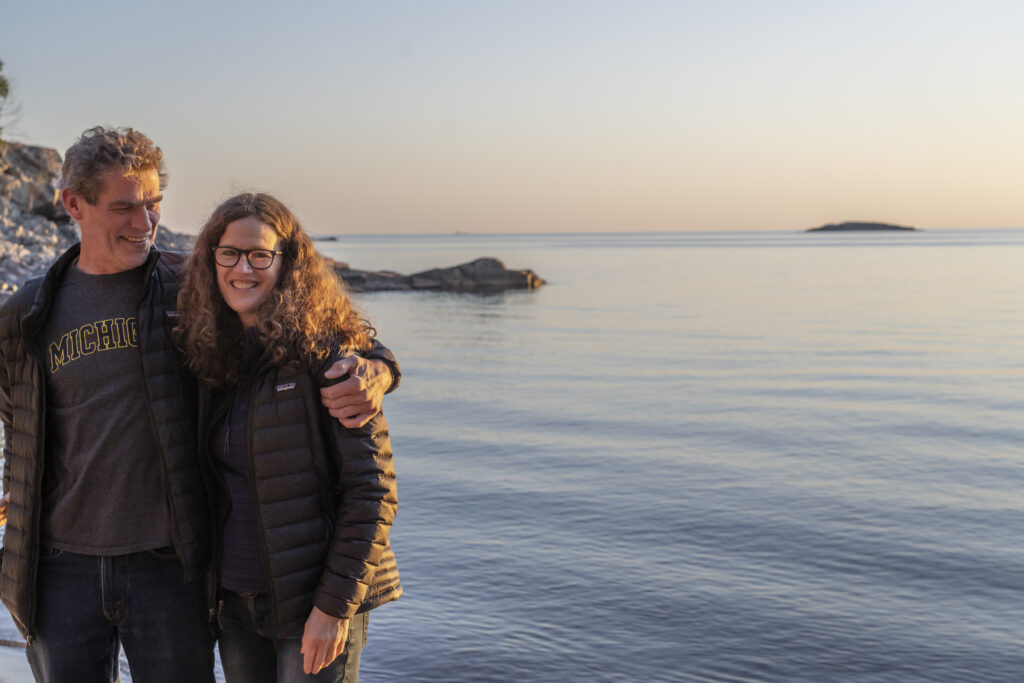 While Jen & Tom’s loyalties to the Marquette area are respectable by their own right, it’s their grander vision for life adjacent to Marquette’s entrepreneurial hustle that truly keeps our ears pressed towards their energetic door. We’re all itching to hear about the professional opportunities surrounding Marquette, but let’s not be too quick to forget that there’s a whole other half to the grander vision. We here at Make it Marquette have been proud to notice that there’s commonality between all of our People of Marquette, and it’s undoubtedly the importance of time spent balancing fulfilling, exciting work… with meaningful life. For Jen & Tom, their focus is heavily infused with family. Having three grown children now out of college & pursuing careers of their own, they’ve taken steps to ensure that their businesses run, without a hitch, for any important time they spend away with their family. Echoing an important aspect of the work-life balance in Marquette from our Barrel + Beam friends that were also recently featured in this series, Jen & Tom similarly advocate for having everything within throwing distance of their front door.

The strength of Marquette exists not only at its foundations, but also within the community members & entrepreneurs that hold Marquette’s essence close to heart. Marquette changes with every new idea, and the people responsible for the creativity surrounding it are, sometimes literally, sculpting the pillars of our significance. There exists a near-perfect incorporation of modernization and history that we know, especially after talking with Tom & Jen, is miraculously unrivaled. They see the greater Marquette, they see what’s possible, and they’re actively uplifting the ideas that pour outwards from the next generations of entrepreneurs. “A big part of Marquette is the people. You have to be creative with how you’re going to survive. There’s an incredible entrepreneurial spirit in this town. There’s opportunity here…[we] think [it’s] kind of endless. It’s self-driven”.

They keep it local, keep it ambitious and show people that ideas are absolutely worth pursuing, but at the same time, that you don’t always have to reinvent the wheel. You can really build what you want here, with whatever tools and whatever foundations you have at your disposal. Finally answering our burning question about why they Made it Marquette, for Jen & Tom, “it’s the community…the people are why we’re here”. Going on to highlight one of the more notable Yooper qualities, they added: “[it’s] the people that we work with, the customers, the visitors that come through marquette and say, “I can’t believe how friendly people are here”…the midwest is friendly, but Marquette is unusual”.

Readily on display, you can catch some of that coveted, unusual friendliness hard at work within Donckers & The Delft in downtown Marquette. During The Delft’s evening hours, in particular, most every night you can expect a personal check-in at your table from Tom himself, and it’s that continued, unrelenting day-to-day personal touch that says more than this short article ever could. Recently adding the old Washington Shoe Store to their owner’s portfolio, we can only imagine what Jen & Tom have in store for the downtown Marquette scene in the coming years.

Jen & Tom are Making it Marquette. Will you?

“the midwest is friendly, but Marquette is unusual” 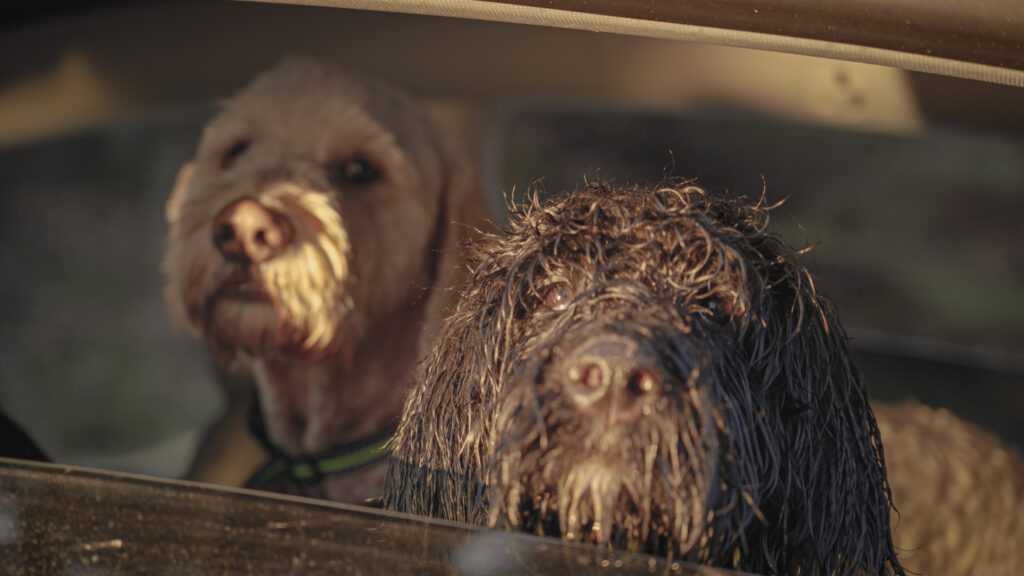 PrevPreviousWhat is a Yooperlite? The Mysterious Glowing Rocks
NextWhy Marquette, MI is the Best Workcation Destination in the U.S.Next